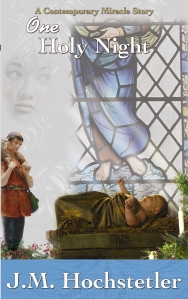 One Holy Night started out as a short story back in the late 1980s. I was working with another author to develop a book of short stories that revolved around Christmas, each with a different theme, and all within a larger story that tied them together. I was assigned to write a miracle story, and what greater miracle is there than the birth of Jesus? After we each wrote several stories, however, the project was shelved and never completed. But although I forgot about the story, a seed had been planted.

Over the years I’ve done a lot of thinking about the gritty issues that impact our lives—intergenerational and interracial conflict, addictions, war, illness, death, divorce. Brokenness of one kind or another affects every family and individual. And the more I thought about it, the more I questioned how we can make sense of our lives and find reconciliation in our relationships. How can we find purpose, strength, and healing when we go through painful experiences?

I continued to think about these issues, and when the Gulf War came along in the mid 1990s, it shaped my thinking some more. Around 1999 or 2000, I was looking for a new project, so I got this story back out, reset it during the Vietnam War, and played around with it off and on. Then 9-11 happened, and right around that time a young woman in our church was diagnosed with intestinal cancer and died within a year. In the fall of 2002 my parents both died as the result of a car accident. Afterward the wars in Afghanistan and Iraq were in all the headlines, and opposition was growing along with the casualty count. Commentators began to compare the war in Iraq with the quagmire of Vietnam—a conflict I was well acquainted with since I was in high school and college during those years.

So all these things started to find their way into this story set during 1967 about a family in a small town in Minnesota that is faced with these issues while the son is away, serving in Vietnam. The conclusion I came up with is pretty well summed up in the little blurb for the book: As on that holy night so long ago . . . in a world torn by sin and strife . . . to a family that has suffered heart-wrenching loss . . . there will be born a baby . . .

For a long time I didn’t think this story would ever be published and find its way to readers, but the Lord hadn’t forgotten it. One Holy Night was published in April 2008 and won the Christian Small Publishers Book of the Year in 2009. It continues to touch readers’ hearts and to receive excellent reviews, all to God’s glory.

J. M. Hochstetler writes stories that always involve some element of the past and of finding home. Born in central Indiana, the daughter of Mennonite farmers, she graduated from Indiana University with a degree in Germanic languages. She was an editor with Abingdon Press for twelve years and has published four novels. Daughter of Liberty (2004), Native Son (2005), and Wind of the Spirit (March 2009), the first three books of the critically acclaimed American Patriot Series, are set during the American Revolution. One Holy Night, a retelling of the Christmas story set in modern times, is the 2009 Christian Small Publishers Fiction Book of the Year and a finalist for the 2009 American Christian Fiction Writers Long Contemporary Book of the Year.

You can find Joan online at www.jmhochstetler.com or at this book’s blog http://oneholynight.blogspot.com.

One thought on “The Story Behind ‘One Holy Night’ by J.M. Hochstetler”