I have always been a huge fan of the fantasy genre.

When I decided to write a book I subconsciously ended up choosing the fantasy genre. What attracted me to this genre were the limitless possibilities it presented. Imaginative literature has such immense scope that it is one of the most exciting genres. Besides it is so great to be able to write something for the young generation and to be able to capture their imagination. The inspiration for my book came from my life, the world around me and the people I know.I tried to create a magical world which is similar to ours but has enough magic to provide an enchanting escape from the reality. The magical world created in the book is fairly detailed and reads as a parallel realm to ours.While creating the main characters, I wanted to create believable real life characters that would also inspire the readers, especially the younger generation. I was inspired from real life problems that kids face every day like bullying, body image issues, peer pressure and so on. The main protagonists of my book, Amy and Drake go through common teenage problems but they deal with their issues in a manner that can be considered inspiring. They evolve as stronger people and present good role models to the readers.

After the book was completed we decided to go down the self – publishing route. That has been an amazing adventure in itself. When we started off we didn’t know much about blogs, book marketing, consignments etc. It’s been a slow learning process but extremely worthwhile. Our experience has taught us that writing the book is just one part of deal. Promoting the book and getting it out there is a completely different ball game. You need to have a marketing strategy planned, a budget in mind and a thousand other pertinent details. 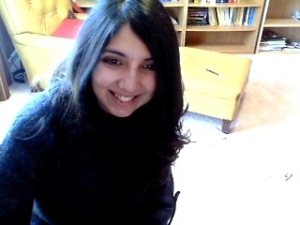 Ray East and Sam D has moved to Voluspa and live in the Forest of Skotos with their 5 year old daughter and a pet Typhon.  They visit Earth with the help of an Empath from time to time. Ray East did her masters in Phsychology from Univeristy of Sussex and has worked as a counselor for adolescents. Sam D used to teach at a SPJC before he moved to Voluspa.

Their latest book is Voluspa: A Magical World.