The Story Behind The Third Grace

I stood in the golden sunlight filtering through the courtyard windows of the Louvre Museum in Paris, transfixed by the life-sized marble statue grouping elevated before me. It was 1989 and I was in my glory on my long-anticipated first trip to Europe, surrounded by the culture of France—its tastes and sounds and smells. But this quintessential moment of discovery in the Louvre imprinted itself on my very essence. 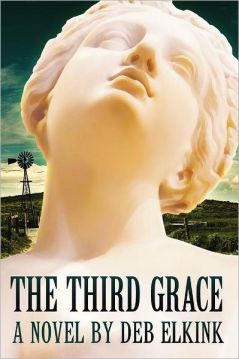 “The Three Graces” was sculpted in 1831 by James Pradier in celebration of the mythological Greek Charites said to preside over the arts. The figure on the left was named Thalia; grasping one end of a swag of flowers that encircled her sisters, she was goddess of the garden and all that flourished in nature’s abundance. Euphrosyne, on the right, was the pleasure-giver, goddess of mirth and dance, the life of the party. The middle Grace (and namesake of my own main character, Aglaia) was the brightly shining goddess of beauty and keeper of treasures; she stepped lightly on a jewelry box like a maiden at the beach sinking her toe in the sand. She held her chin high, gaze cast heavenward in seeking the radiance of the sun or of her father, Zeus.

I in turn, there in Paris in 1989, gazed up enchanted at their rounded bellies and dimpled buttocks, pearly grey skin denting under mutual caresses. I could almost smell the heat of their flesh. The personification of grace, they were poised as if asking, “May we throw our spell around you, beautify you as we clothed the very gods?” I could sense their infinite waiting, triplets frozen in stone for all time, three persons chiseled from one substance. They were a tri-unity of personhood.

And I knew I had found the icon for my novel.

All those years ago I’d been thinking about what I’d write when I had the chance—when my young family wouldn’t require so much of my attention. This trip with my mom to what became my favourite city in the world was a delightful diversion from my busy domestic life as a cattle rancher’s wife on the Canadian prairies. I had a manuscript of sorts already, but it was a scrawny affair cobbled together without any real direction. Discovering the Graces reinvigorated my passion in the writing project and sent me back home with intentions to start anew.

But good intentions are not known to pave the road to instant success, and it took me another two decades to give voice to the Graces. I worked hard at it: I finished off home-educating three kids and, when they went on to success in high school and then university classrooms, I returned to studies of my own, graduating with a master’s degree in theology. I paid my dues: I freelanced articles, and wrote for a quarterly, and edited for academics, and honed research and composition skills until I couldn’t defer any longer. In 2008 I submitted my 60,000-word story to an agent, who contracted me and immediately insisted I add 40,000 more words! The Third Grace was eventually placed with a small publisher in North Carolina, printed in paper and eBook format in December 2011, and went on to win a coveted Canadian award in June 2012.

All of my sensual experiences in Paris—eating succulent treats from a chocolaterie, listening to a violinist busking in the Métro, being enveloped by the perfume of a passer-by on the Champs-Elysées—make their way into my novel, because they’ve made their way into my heart.

Her award-winning debut novel, THE THIRD GRACE, is set in the contrasting locales of Parisian street and Nebraskan farmyard, and incorporates Greek mythology and aesthetics with the personal search for self. Her writing has been described as “layered and sumptuous,” “compelling,” and “satisfying.”

Pick up your paperback copy of Deb Elkink’s THE THIRD GRACE at Chapters/Indigo:  http://www.chapters.indigo.ca/home/search/?keywords=third%20grace%20elkink&pageSize=12