I wish Jacqueline Susann were here; I would love to thank her.  The legendary novelist died well before I was born, but it was because of her breakthrough novel, Valley of the Dolls, that Hollywood Strip was born.

I first read VOTD four-and-a-half years ago.  I love the film starring one of my all-time favorite beauties, Sharon Tate, and figured I may as well check the book out.  It is a surprisingly sedate read–especially in comparison to the movie–with a melancholic undercurrent.  As I flipped through the pages, I could literally smell the desperation permeating out of the main character’s pores.  Susann didn’t just pen a morose tale of three young, glamorous women–oh, no.  Where would be the fun in that?  No, Susann gave us a twist:  she incorporated promiscuity, substance abuse, abortion, suicide, and plastic surgery into the mix.  These were shocking subjects for 1966, and the public devoured the book fervently.  What’s ironic is these same issues are just as relevant now, nearly forty years later, as they were then, which leads me to conclude the following:  Jacqueline Susann is the Godmother of Chick Lit.  Before there was a Bushnell or Collins, there was a Susann.

What exactly VOTD stirred in me–was it the scandalousness, the sexuality, the sadness?–I’m not altogether sure.  Perhaps some of Jennifer, Anne, and Neely’s escapades reminded me a little of my own.  Maybe I was drawn to the duality, the combination of despondency and sensationalism.  Or it could be I was intrigued with the author herself.  Susann and I had similar circumstances; both only children, we had pursued acting in our twenties and rejected more simple, planned-out lives.  Whatever the reasoning, a lightbulb in my head flickered on–I knew I had to write my own book.  Never mind I knew nothing about writing books; I was fine with learning as I went along.  After all, the Godmother hadn’t ever been published before her debut novel, Every Night, Josephine!  If she could make it work, so could I.

Without VOTD, it’s doubtful I would have found the inspiration to compose Hollywood Strip.  I suppose something or someone would have compelled me to create a project I was equally passionate about–though I can’t imagine what that would be.  It’s safe to say I would be in a different place in life without the Godmother–and, as I’m really enjoying this current stage, my hat goes off to her. 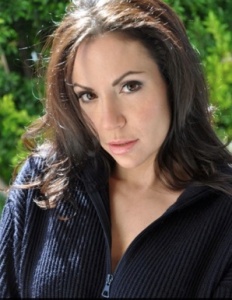 Shamron Moore became fascinated with Hollywood at a young age.  She counts Ava Gardner, Greta Garbo, and Sharon Tate as early inspirations.  In 2000, she left her home state of Michigan for the excitement of Los Angeles.  Over the course of nearly eight years, she appeared in various international print publications, commercials, television shows, and feature films.  She left the industry to focus on writing, one of her lifelong passions.  Many of her experiences in Hollywood served as inspiration for Hollywood Strip.  She has since written a sequel and is currently penning her third novel.  You can visit Shamron at www.ShamronMoore.com.

Her latest book is Hollywood Strip.