I’d always thought of myself as an actor/writer, but one day in Los Angeles in 2005, I realized that all I was writing was a few words in a journal every morning.  A very few very boring words.  I needed to be around other writers.  That was my solution.  So, I saw a notice in a newspaper that sounded like the ticket for me: a writing group where the only goal was to produce words that you could read to the other members of the group.  When I got there, I realized that I was in a group of talented writers who were being guided by an even more talented writer – April Daisy White – and it was then that I learned that it was memoir writing for actors who wanted to do a one-person show.  A show using their own lives as a script.  This frightened the life out of me, but I thought I should stay and write anyway.  And I did.  Daisy, was a great teacher, coach, human being and she had had a very interesting life.  So I wrote a chapter every week or so and in not too long I had a memoir.  This stunned me and surprised and pleased my husband, Charles Pfahl.  Daisy went on to do a successful one-woman show about her own life – even went to Broadway with it.  I had no illusions about doing that, so I put my memoir away.  Well, actually I sent it to a few publishers first.  They all liked the memoir, BUT it was too intense, too relentless. Everyone else had thought it quite funny.  Dark, of course, but humorous at least.  So the manuscript was put away and I went back to adapting screenplays for other people who had written books.  Then Charles and I moved to Albuquerque for economic reasons.  But it was there that he became ill and eventually died.  Before he died, he asked me to please publish Juggle and Hide.  I promised I would and now I have.  I keep my promises and I try to always be early for appointments.

Find out more on Amazon

Juggle and Hide is award-winning writer Sharon van Ivan’s dizzying story of her unconventional, often harrowing, and  sometimes hilarious life. With a childhood split between time with her alcoholic mother in Akron, Ohio and her gambling dad in Brooklyn, New York, as well as other challenging family members along the way, she was destined to find comfort on the edge and in the company of highly creative and self-destructive individuals.

Hers is a story of getting drunk and getting sober, of triumphs and failures in her work as an actor and screenwriter, and of exhilarating love affairs, including her twenty-year relationship with the renowned artist Charles Pfahl. The book is quirky and compelling, and engaging on many levels. Sharon takes the reader on a roller coaster ride into the depths of personal tragedy with unexpected outcomes. 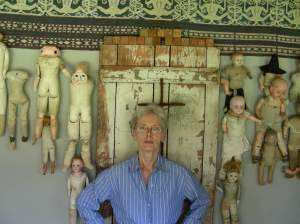 Sharon van Ivan lives in Albuquerque, New Mexico, with her two cats, The Duke and Earl.  She was born in Brooklyn New York and couldn’t wait to move back to New York when she grew up.  Her parents divorced when she was a baby and she lived with her mother in Akron, Ohio, until she returned to New York in her early 20s.  There she studied at the American Academy of Dramatic Arts and was a working actress for many years.  But she was always writing.  Her debut as a playwright was when she was 10 years old and living in Sacramento, California.  She wrote about the hardships of a young girl in Mexico.  The play was so good, it was presented to the whole school.  Sharon was mortified and did not write again until high school.  Then when she had a writing assignment, she would dream about it the night before, and write it just before class.  She was an A student in English.  Not the most popular person in school, however.

Growing up with an alcoholic and, therefore, mentally ill mother and a mostly-absent father (plus a slew of stepfathers) was a challenge that Sharon met head-on – as she had no choice. Later in life when she did have a choice, the patterns had already been set and she followed a similarly disastrous road until she found show business, a great psychiatrist and the love of her life, the renowned realist painter, Charles Pfahl.