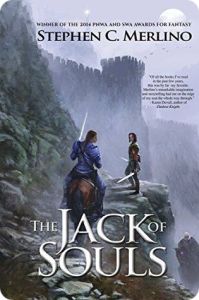 What was the inspiration for this story? What a great question! The short answer is that this story came from my habit of asking, What if…? and dreaming up answers.

What if there was a land where…

What if there was a young trickster who…

And what if his lover…

Stephen King talks about stories beginning the moment he sees a specific character and setting in his mind. Then he gives the character a problem, and watches her spring to action to fix the problem. From then on out it’s like following a string through long grass—never sure where it’s going, but pretty sure of the direction.

That’s the way I experience writing, too. I don’t outline it. I start with a What if or two, and before I know it, I’m seeing visions of people and places.

For The Jack of Souls, it began when I imagined a young rogue on the edge of a frontier, making a killing selling grain to pioneers on a land rush.

The image came to me as I led a history tour through the American West. In the days when I was a tour guide, I lived among stories of wilderness and adventure and especially loved tales of gold seekers and the people who supplied them. Few of the gold seekers held on to much gold, but the people who sold them supplies had bags of it!

I also admired the pioneers who answered the call of the Homestead Act—that most admirable legislation—that sent thousands west for free land.

So how did The Jack of Souls go from Western inspiration to Fantasy?

Easy! A great thing about fantasy is you can riff off of a variety of interests and mash them together to create something new. Along with the American West, I have a passion for Shakespeare’s England—Elizabeth’s England—which I studied in grad school.

I dare say the zeitgeists of the American West and Elizabeth’s England have a lot in common; both were thrilling periods of exploration, thievery, optimism and immense national pride (not to say arrogance). So why not create a world where a kingdom like Elizabeth’s England has a wild frontier full of magic and mystery and monsters?

And voila! The setting took shape in my mind. I saw a pacifist queen ruling alone, educating the ladies of her court, refusing to marry, and beleaguered by lords who wished to put an end to such nonsense by placing a warlike king on the throne. And I saw her creating a savvy political distraction for these malcontents by opening her frontiers and offering free land to any who would settle it.

Land rush! What lord could resist?

Which brings us back to the young man selling grain to land-rushing pioneers.

I wanted the main character to be a rogue. He wouldn’t be particularly strong, but he’d be extremely clever and living by his wits. I imagined him as a frontier con artist with a heart of gold—that is, a trickster who only targeted corrupt, treasonous or abusive lords.

Plus, it would be fun if he had a girlfriend who was his muscle. Another interesting female! She would be one of the Queen’s free ladies, intent on becoming a knight.

At that point I had two of three vital elements of story: Character + Setting, but for a story we still need a Problem.

So I gave him one. He’s going to die on the following day unless he finds a way to break a curse on his fate. 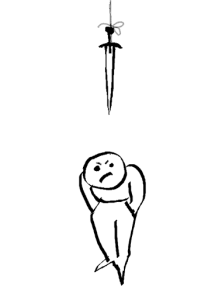 Ouch. That got him moving.

And from there it was a just matter of watching him go and following the string through the grass of the world I’d imagined.

Stephen C. Merlino lives in Seattle, WA, where he writes, plays, and teaches high school English. He lives with the world’s most talented and desirable woman, two fabulous children, and three attack chickens.

Growing up in Seattle drove Stephen indoors for eight months of the year. Before the age of video games, that meant he read a lot. At the age of eleven he discovered the stories of J.R.R. Tolkein and fell in love with fantasy.

Summers and rare sunny days he spent with friends in wooded ravines or on the beaches of Puget Sound, building worlds in the sand, and fighting orcs and wizards with driftwood swords.

About the time a fifth reading of The Lord of the Rings failed to deliver the old magic, Stephen attended the University of Washington and fell in love with Chaucer and Shakespeare and all things English. Sadly, the closest he got to England back then was The Unicorn Pub on University Way, which wasn’t even run by an Englishman: it was run by a Scot named Angus. Still, he studied there, and as he sampled Angus’s weird ales, and devoured the Unicorn’s steak & kidney pie (with real offal!), he developed a passion for Scotland, too.

In college, he fell in love with writing, and when a kindly professor said of a story he’d written, “You should get that published!” Stephen took the encouragement literally, and spent the next years trying. The story remains unpublished, but the quest to develop it introduced Stephen to the world of agents (the story ultimately had two), and taught him much of craft and the value of what Jay Lake would call, “psychotic persistence.”

Add to that his abiding love of nerds–those who, as Sarah Vowel defines it, “go too far and care too much about a subject”–and you have Stephen Merlino in a nutshell.

Stephen is the 2014 PNWA winner for Fantasy.

His novel, The Jack of Souls is in its fourth month in the top ten on Amazon’s Children’s Fantasy Sword & Sorcery Best Seller list, and among the top three in Coming-of-Age.