For years I had begged my father to go with me to his hometown in Sicily where he was born and raised until the age of 15. Most of the time Dad would say he didn’t want to pucker up for all of the kisses his cousins would expect. One day Dad said, “We could never travel together, we’d kill each other.” 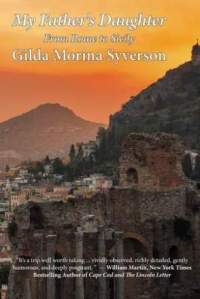 Now that was closer to the truth. Having left home for college decades earlier, I had become a more independent woman than my Italian-American upbringing encouraged. But I still wasn’t ready to give up going to Sicily with Dad.

One Easter holiday while driving to upstate New York to visit my parents, my husband Stu and I came up with an idea. We were going to trick my father into going to Italy and Sicily by making him an offer he’d hate to refuse–that’s all in the memoir. Once Dad agreed to go, so did my mother. (Mom was the first child from her Sicilian family born in the United States).

My yearning was to walk with my father, as he meandered down the narrow streets of his small Sicilian town. I knew if I were there with Dad, his story and the stories of his ancestors would start pouring out. The experience of traveling with Dad to his hometown, with Mom to her family’s village a few hours away, and with my very-American husband, was the inspiration for my memoir, My Father’s Daughter, From Rome to Sicily.

Once home, all I wanted to think, talk and write about was my trip to Italy and Sicily with the three people I loved the most. My initial intention was to get the story written. As time went on, I saw that I actually had a memoir in the making.

After the manuscript was complete I followed the age-old suggestions of finding an agent through places like The Publishers Weekly and other periodicals, by attending writers’ conferences and events, by sending out query letters and entering contests. What surprised me most is that after all that exploring, I found my publisher in a unique way.

I met Laura Ponticello of Divine Phoenix Books in conjunction with Pegasus Books at a spa outside of Syracuse, New York, where I was born and raised. It was in the same town where I went to summer camp as a child. Laura was giving a talk on lavender. Intrigued with Laura and her presentation, I went up and talked to her afterwards. That’s when I learned about her book list entitled Laura’s List that I joined online as soon as I arrived home. I followed Laura’s List, and then one day I decided to query her about my memoir. She asked me to send her a copy, and within a short time, Laura responded. She has been a devoted and committed publisher and our ongoing collaboration has been an incredible experience.

Gilda Morina Syverson, artist, poet, writer and teacher, was born and raised in a large, Italian-American family in Syracuse, New York. Her heritage is the impetus for her memoir My Father’s Daughter, From Rome to Sicily. Gilda’s story was a Novello Literary Award Finalist previously entitled Finding Bottom: an Italian-American woman’s journey to the old country.

Gilda’s award winning poems and prose have appeared in literary journals, magazines and anthologies in the United States and Canada.  She is also the author of the full-length poetry book, Facing the Dragon, and the chapbook, In This Dream Everything Remains Inside. Her commentaries have been aired on WFAE, Charlotte, N.C.’s public radio station.

Gilda moved to Charlotte, NC after having received an MFA in Fine Arts from Southern Illinois University. She received a Bachelor of Science Degree in Art Education from Buffalo State College. Gilda has taught in the Creative Arts for over 35 years including memoir classes and workshops for Queens University of Charlotte, The Warehouse Performing Arts Center in Cornelius, N.C. and at various other locations. Her fine art has been exhibited regionally, nationally and internationally. Her angel drawings and prints are in a number of collections throughout the United States, Canada and Italy.

Gilda lives outside of Charlotte, N.C. with her husband Stu.