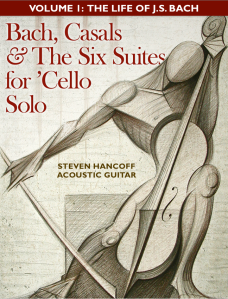 I have transcribed and recorded the thirty-six masterpieces that comprise J. S. Bach’s Cello Suites on acoustic guitar—almost three hours of music.

I have also written a four-volume, highly interactive e-book: Bach, Casals and The Six Suites for ‘Cello Solo — biographies of Bach and of Pablo Casals, the man who rescued the Suites from oblivion. This work is anecdotal rather than technical, describing the lives of these great men in the context of their times as I have come to fathom them—as fascinating, illuminating, and inspiring artists, and as human beings challenged, like all of us, by the demands life.

In addition to the storytelling, the book is highly illustrated, with about 1,000 period pictures – portraits, oils, watercolors, stained glass, photographs, etchings and engravings, documents, sculptures, statues and monuments. These pictures illustrate the text, and make the e-book very colorful and accessible.

In addition, more than 300 contemporary artists have contributed hundreds of works of contemporary art, all of which is inspired by J. S. Bach and Pablo Casals. This is the most comprehensive art book devoted to Bach and Casals that has ever been compiled.

To tell the story of the Cello Suites, I have also created and embedded 25 beautiful and compelling videos.

Not only that but the written transcriptions — the scores – will be made available for free so that guitarists who wish to learn these pieces can try their hands at them.

Here we have a set of music by Bach never before performed on acoustic guitar, accompanied by entertaining, easy-to-read, stunning and informative biographies in the form of a visually bountiful, highly interactive e-book.

No, I cannot tell you what compelled me to do this. It more or less feels like it is my destiny to have done this. I know that cello is a one-note-at-a time instrument, while guitar is idiomatically suited to play harmonies, bass lines and chords. So, the creative juice is in harmonizing the Cello Suites while still playing all of Bach’s notes, and staying true to the profundity of his musical and emotional intent.

In order to fulfill this intention, I started to read about the man, then think about it, how did he come to compose this music at this time in his life. I kept on reading, and thinking about it, and writing, and talking to people… and eventually this i-Book project got born. 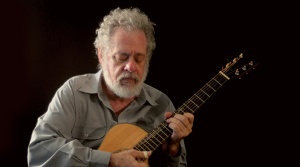 Steven Hancoff began playing guitar when he was 13 years old, captivated by the folk music craze of the 1960s. Within a year he was performing in coffeehouses around Baltimore and Washington, D.C. For nearly 15 years, he toured the world—about 50 countries—as an official Artistic Ambassador representing the United States of America.

He is a graduate of St. John’s College, home of the “100 Great Books of the Western World” program and has a Masters degree in clinical social work. He is a psychotherapist, a Rolfer, and a practitioner of Tai Chi. An avid hiker, he is also a member of the Grand Canyon River Guides Associations.

Bach, Casals and The Six Suites for ‘Cello Solo is available from the iTunes store.

Listen to an interview with Steven Hancoff on CONVERSATIONS LIVE!