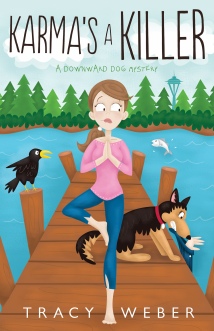 There are so many stories behind Karma’s a Killer. The story of the neighborhood crows that have befriended my German shepherd, Tasha. The story of fractured family relationships. And of course, story of solving a murder. But the story closest to my heart is that of a pigeon I saved over three years ago.

I rescued the injured bird two days after my sixteen-year-old cat died. Devil-cat earned her name.  She hissed, she scratched. No one could touch her without fear of hemorrhaging.  All until she had a stroke and magically changed, becoming suddenly loving, if somewhat off-kilter. Her recent transformation made her death that much harder.  After all, Devil and I had just fallen in love.

When an instructor e-mailed that there was an injured pigeon huddled outside my yoga studio, I immediately thought, Not another death. I can’t stand it.  I even considered ignoring the e-mail in hopes that the problem would magically resolve itself.

Instead, armed with gloves, towels, a box and goggles, I set out to capture the wayward bird.  But what would I do when I caught it?  According to Washington State law, some animals aren’t worth saving, and pigeons are among them.  I finally found a lovely lady who had given up government funding so she could help all animals, including my pigeon.

That bird couldn’t fly, but man could it run.  I’m sure I looked like an idiot chasing the winged beast around the studio’s parking lot, begging it to stop and assuring I meant it no harm.  When I finally captured it, I placed it on a towel in my hole-punched box and took off for the rehab center.

Over an hour and several wrong turns later, I pulled up in front of the saintly woman’s home. Owls, crows, blue jays, pigeons—even a chicken—all recuperated in cages in a converted family room. Thankfully, my pigeon was still alive.  The victim of a hawk attack, she wouldn’t have made it much longer out in the world, but because of one kind woman, she got a second chance.

Judith, the wildlife rehabilitator in Karma’s a Killer, is not the woman who helped my pigeon. However, I tried to capture her loving energy. I hope I did her—and the work she does—justice. She certainly made a positive mark in my world. 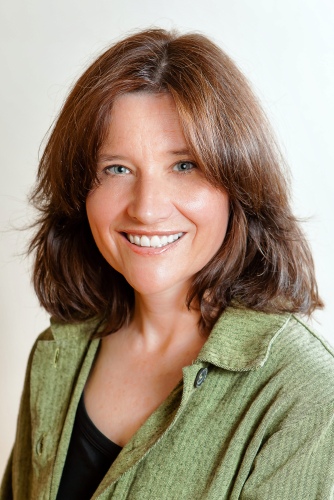 A certified yoga therapist, Trcay Weber is the owner of the award-winning yoga studio, Whole Life Yoga in Seattle, and the creator and director of Whole Life Yoga’s teacher training program which, to date, has certified over 250 yoga teachers. She and her husband live in Seattle with their challenging yet amazing German shepherd Tasha.

Connect on with Tracy on the Web: