My inspiration for writing this book comes from different angles. This angle is through my windowpane. Some nights I just sat at the bay window gazing out at the street lamp at the end of the driveway. I hoped, by chance, my son would pass through the 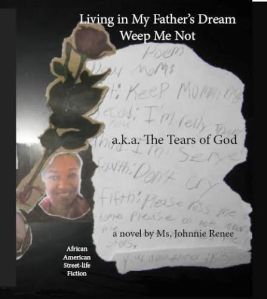 light and I would catch a glimpse of him walking through. I hoped he was alive, and I prayed to God to keep him safe from harm and the shadows of death. For fourteen years, I begged God to keep him safe. Then one day, I began to realize that I had focused in on my son so much that I was at fault for not praying for other at-risk youth dying on the streets, alone, and without their mother’s presence. I tried to imagine how it felt to die like that. Had she have been there, would she have reached out to him/her? Would she have cried out? Would she have tried to catch the tears falling to her chest? Would she have fallen to her knees, and said please to our Father in heaven. Would she have known that my own heart hurts as much or even more than hers did? Every day I heard of another teenage child dying in the street, infants killed because of drug deals gone badly. I felt the pain in my own heart. I felt my tears slowly build. I believed it to be my fault that these kids were dying, simply because I did not take a moment in prayer to pray for them. Later, I began to understand that our at-risk youth couldn’t help themselves, even if they tried. They are living in a constant cycle of death, drugs, and violence. I think this condition of living just tears a mother’s heart apart, and I want to help end this pain. Living through years and years of pain with no peace is just too much for a mother to bear. So, I can fairly say, my inspiration for writing my story is to give ten percent of all sales to organizations that can help our youth make successful choices in life, thereby ending the senseless pain in a mother’s heart.

Ms. Johnnie Renee is a first time author. She is the mother of an at-risk adult child, so she is accustomed to street life, visions, and dreams. Inspired by the eyes of a dead rapper, Ms. Johnnie Renee hopes that by writing this book (though it depicts street life) that a child’s mind can be freed from violence, and drugs.

Her latest book is Living Is Living In My Father’s Dream: Weep Me Not.