I used to like to write about as much as going to the dentist. I loved to read, but writing . . . . Well, that was hard work. Really hard work. And, frankly, while I had an inkling that I just might have an aptitude for it, the gauntlet I thought I had to tackle was too imposing. So, I never got to it—until several decades ago. I was right about the daunting challenge, and I was right about the really hard work. But the ideas that came flowing into my mind and the words that seemed to curl themselves around them f 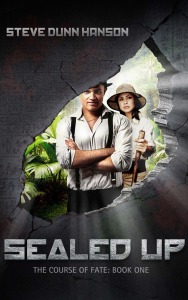 inally became too much for me to hold inside, and I began to write.

Problem was, with making the kind of living that would support my family including my wife, Joyce, and seven children, and my heavy involvement in community and church, I had little time to do it. Even so, over the next couple of decades I had three books published, including a something longer than a novella and two self-help books. But it wasn’t until Joyce and I returned from a two-year stay in Romania on a church mission that I had the time to sink my teeth into writing. And I’m doing that fulltime now.

The actual idea for this book came to me some seven or eight years ago, and it has been five years, hit and miss, in the writing. Much of this time was spent in research. I wanted every aspect to be completely authentic–from language, to people and customs, to settings, to clothes, to technology, to historicity, etc. Even the days and times of the heavenly phenomena (solar and lunar eclipses and the Venus transit of the sun) are spot-on. And I wrote it because in one way or another and at some future time, I believe that what I have portrayed fictionally as happening, will, in fact, happen. Prescient? I guess we’ll see.

And my characters are real. In fact, one of my key characters, quadriplegic, Hyrum Bentley, is patterned after my dear late friend, Jack Rushton. His wife, JoAnne, not only gave her permission for me to duplicate Jack’s mannerisms and personality, but coached me along the way. I think you will love, Hyrum Bentley!

I’ve been very pleased with how Sealed Up has been received. It reached as high as #51 in the Amazon Kindle top 100 eBooks sold and was designated an Amazon Best Seller. The cover, thanks to Matt Doyle who designed it, won 1st Place-Gold Medal from AuthorsDB.

Sealed Up is the first in The Course of Fate series of three books. Expect the second, The Council, in about a year.

I’ve lived in places that grew me . . . from a small Idaho farm town, a run-down neighborhood in St. Louis, and a middle-class southern California community, to Sydney, Australia, and Bucharest, Romania. My experiences are as varied as the places I’ve lived. I have a hopper full of “reality” including being a volunteer jail chaplain and flying with a U.S. presidential candidate in his small plane when an engine conked out. And all of this is fodder for my writing.

My latest book is the action/adventure/suspense novel, Sealed Up.