When my children were small I used to say that I was raising a dog to teach them that the world was good, and raising a cat to teach them that the world was also bad… Parents with pets know what a gift they are for their children. A child who comes home from school in a mood sometimes prefers to sink his head into the dog’s fur over any other kind of comfort. And even if the cat i 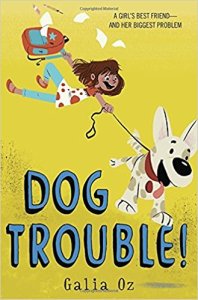 s not always able to give that canine support, just observing it a comfort in itself…

There’s a good chance that children who grow up with pets will learn to be more empathic toward others, tolerant and open. This is a fundamental element in the plot of Dog Trouble.

An equally significant source of inspiration is the children’s literature I grew up on, with protagonists like Anne Shirley and Huckleberry Finn, Mary Poppins and Astrid Lindgren’s Pippi Longstocking.

Dog Trouble revolves entirely around the unique language of Julie, the narrator, and in a sense the language itself, the one you so often hear during recess, was also a source of inspiration for me. I wanted to write a book without an adult narrator, a book written as a stream of consciousness of a child. A book packed with action and even some mystery-solving, which would constantly reveal the heart and soul of its protagonists. I worked very hard to create this childlike language, which seems very casual, that could contain both soul and plot, without seeming forced.

Oh, and one more thing that I wouldn’t recommend writing without: humor. Humor can drive a plot, create a useful distraction, soften difficult moments, and create empathy toward a protagonist. A good joke at the right moment is a dizzying element that sweeps the reader forward. It’s very hard to write with humor, by the way. And I’m not talking about the wicked humor at the expense of others, that’s humor in its lowest form, very easy to produce. In order to actually be funny and moving at the same time, the writer should be able to embrace sadness. Yes, even when writing for children! Therefore, strange as it may sound, melancholy can function as a good source of inspiration, too.

In Israel, five books were published in the Dog Trouble! Series, all of which were bestsellers and sold over 150,000 copies in Israel over the past decade.

Galia Oz was born in Kibbutz Hulda, Israel, in 1964. She studied film and Television in Tel Aviv University 1984-87.

Her award winning series of 5 books titled DOG TROUBLE was published in France, Spain and Brazil – and recently in the US by CROWN BOOKS Random House. The series is a steady seller in Israel for over 10 years (selling over 150,000 copies).

Over the years, Galia Oz has been meeting thousands of readers in Israeli elementary schools, and taught creative writing and classic children’s literature to kids in public libraries.

Galia Oz is married and has two kids, a dog and a cat, and they all live in Ramat Hasharon, just outside Tel-Aviv.

Readers who have graduated from Junie B. Jones and Ivy & Bean will fall head over heels for feisty Julie and her troublesome new dog.

Julie has only had her dog for two weeks, but she is already causing all sorts of problems. For starters, she is missing! Julie suspects the school bully Danny must be behind it. But it will take some detective work, the help of Julie’s friends, and maybe even her munchkin twin brothers to bring her new pet home.

Wonderfully sassy and endlessly entertaining, the escapades of Julie and her dog are just beginning!

Julie’s adventures have sold across the globe and been translated into five languages. Popular filmmaker and children’s author Galia Oz effortlessly captures the love of a girl and her dog.

“A funny exploration of schoolyard controversy and resolution.” –Kirkus Reviews

“Will resonate with readers and have them waiting for more installments.” –Booklist