Conch Shell Confessionals actually started as a project for one of my screenwriting classes at UCLA. There’s this thing that they say all first time screenwriters fall prey to…we ALL write about ourselves. So of course I couldn’t resist writing about myself!

Initially, I set out to explore how my Nana’s death affected my family but I couldn’t get myself to write in the morbidly romantic t

one that I felt it needed to be in. Not to mention, all I could get down were these horrendous dating stories I was subjecting myself to (a.k.a. my Golden Years of dating). So I let my fingers tick away at my keyboard until I had the framework of Conch Shell Confessionals. The class ends and I totally forgot about my short script I had written about my dating life.

Fast-forward a year or two and my Golden Years of dating are done and I’ve met my boyfriend. There we were rummaging through my laptop, finding a hidden poem or two and then—SOLID GOLD—my short script about my awful dating life! He was rolling, laughing, and shouting, “I can’t believe that happened!”

I smiled and thought to myself, if only you knew.

Finally he gathered himself and wiped the tears from his smiling eyes and snickered, “You have to finish this!”

Bringing the book to life as a published work has proven to be more time-consuming and soul-sucking than actually writing and I’ve loved every moment of it. For me, the whole process from writing to editing to publishing to marketing has taught me so much! I’m a renaissance woman now, a purveyor of all things (book-related). It has been quite the year!!! 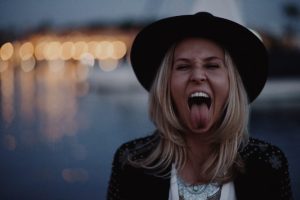 Processed with VSCO with m5 preset

Dax Marie was five or so, when the man that she would otherwise call, “father” gave Dax her issues. What’s the medical terminology for that? Oh, Daddy Issues! For nearly the whole of her life she has tried to deny this grave medical condition and up until about seven years ago, she was doing alright. By no means was she swimming through the world with ease, but she did like aight (that’s hood talk for alright).

It was not until sometime in high school when she discovered her self-diagnosed condition. Sigmund Freud (you may have heard of him, he’s like a coke-head genius) told Dax (in a text book) that she has Penis Envy. Poor thing, she was absolutely flabbergasted!

“Me, Dax Marie? Associated with male genitalia?” she thought to herself.

So, it was then and there, her junior year of high school that she knew what