Way, way, way back in the 1980s, when I was already a not-so-young adult, I read Martin Gardner’s Science: Good, Bad, and Bogus. That book included an essay entitled “The Irrelevance of Arthur Conan Doyle.” In that essay, Gardner argued that Arthur could not have created Sherlock Holmes because the two personalities were so different. Holmes was skeptical and 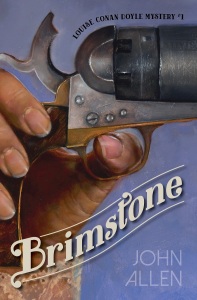 scientific. Arthur was gullible in the extreme, being fooled by every cheap medium and fraudster of his day. Gardner did not identify any possible ghostwriter.

Being an engineer and a skeptic, I investigated Gardner’s remarkable claim. I had no trouble discovering that Arthur was indeed remarkably gullible, but I could not immediately identify a likely ghostwriter, assuming any had ever existed.

After working my way through more than a few of the numerous biographies of Arthur Conan Doyle, I developed a hypothesis that the early adventures were written by Arthur’s first wife, Louise Hawkins Conan Doyle, and that Arthur wrote the later, weaker adventures.

The manuscript for the first Holmes adventure, A Study in Scarlet, was completed eight or nine months after Arthur married Louise. What was intended to be the last of the series, The Final Problem, was completed just before Louise traveled to Switzerland in the hope that the cold, high altitude air would save her from her recent diagnosis of pulmonary tuberculosis, “galloping and wasting.” She took Sherlock with her and dropped him down Switzerland’s Reichenbach Falls in the grasp of her newly created Professor Moriarty. Moriar is Latin for I die.

As a test of my hypothesis, I wrote a stylometric analysis program to distinguish variable authorship among collections of stories. I divided Arthur’s many, many works into three collections: the earliest Holmes adventures, the latest Holmes adventures, and all his non-Holmes works. To my amazement, my stylometric analysis identified three separate authors. Not one. Not two. Three.

I presented my evidence of Louise’s authorship in my 2017 non-fictional book Shadow Woman: The True Creator of Sherlock Holmes. Now I continue bringing Louise’s story to the public consciousness by having her solve a series of mysteries in Sherlockian fashion. In each book, she will applies the mathematical, scientific, and technical gifts that allowed her to create a character such as Sherlock Holmes.

I wish to add that Louise was more remarkable than even a superficial reading of Sherlock Holmes might reveal. She embedded within those adventures numerous, sophisticated, and interconnected allusions, some transparent, some so obscure that they would never be discovered in absent the unanticipated presence of the internet. Taken together, these allusions constitute a comprehensible subtext to her adventures. That subtext speaks to the equality of all mankind.

In addition to admiring this remarkable woman, I have become quite fond of her.

John Allen was born in Long Beach, CA. An engineer “by education, training, and experience,” he describes himself as “a recovering engineer.”  He left engineering to become the junior partner in Allen & Allen Semiotics Inc., a corporation that his wife, Lynn, launched for their diversified home business. Their projects include designing databases for mid-sized companies. John Allen holds a BS from the United States Air Force Academy, an MS from the University of Southern California, and an MA from the University of California, Riverside.

Author John Allen has a theory about the creator of Sherlock Holmes:

Sir Arthur Conan Doyle did not create Holmes. It was Doyle’s wife, Louise Hawkins Conan Doyle, who gave birth to the beloved sleuth.

Allen has put his beliefs to the test, writing and publishing the first of a projected 12-novel series of Holmes mysteries titled BRIMSTONE. His detective is Louise Hawkins Conan Doyle, and Allen names her as the author of the tale he presents, set in 1879 Bristol, England.

In a previous book, SHADOW WOMAN, Allen set out to prove that Louise was the true creator of Sherlock Holmes. The inspiration for his startling and controversial theory of authorship was a 1980s essay by Martin Gardner called “The Irrelevance of Arthur Conan Doyle.” Gardner claimed that Arthur was “too gullible and to easily duped to have created Sherlock Holmes.”

Allen determined that Gardner was correct, but Gardner identified no alternative author. Allen continues, “So I decided to give it a try. I came to suspect Louise as the actual author, but I lacked the knowledge and tools to make a solid case.”

Then the Internet came along, giving Allen a valuable research tool. He became convinced that Louise did in fact create Sherlock Holmes. Allen presented his case in SHADOW WOMAN, which was published in 2017. To further advance Louise as Holmes’s creator, to give her the credit he believes she is due, he is now featuring her in a series of mystery novels, the first of which is BRIMSTONE.

As if Allen hadn’t set the bar too high already, he has added a subtext to BRIMSTONE that explores contemporary wrongful convictions through his Victorian thrillers.

BRIMSTONE brims with appeal to multiple audiences, from lovers of detective stories to those interested in justice for the wrongfully convicted. Sherlock Holmes would be proud.