Rosemary and Larry had just completed a series of mystery short stories for an online e-zine. They wound up publishing the collection as The Misadventures of Slim O. Wittz, Soft-Boiled Detective. Now, they were looking around for a new detective series. Honolulu, and the whole island of Oahu, was the natural choice for setting as Honolulu was their new permanent home after snowbirding it for more than twenty years. What better way to sell a Hawaii story than creating a Hawaiian private eye, complete with a Hawaiian name, Sam Nahoe, and his family? Their private investigator needed street smarts and mobility, so they chose him to be not only a cab driver, but a Checker Cab driver. A connection to the police force was also needed, so Sam became an ex-cop with benefits.

Truly looking for a backstory on how Sam became an ex-cop, they gave him Larry’s infirmities, spinal complications requiring the use of two canes—the very same canes Larry had dubbed Cane and Able. No, not the biblical spellings. Sam was shot in the spine; whereas Larry endures decay, calcification, and fusions in the same area. Sam’s infirmities fit right in with his abilities to drive a cab and ski-walk otherwise. The canes prove that they can come in handy in some of the stories as well.

Still, something was missing: Sam had neither a partner nor a foil, and the plots needed distractions. Rosemary came up with the perfect idea—who doesn’t love a dog? Rosemary grew up with a golden named September Blaze. She devotes a chapter to him in her memoir Love, Laugh, Panic! Life With My Mother. Rosemary and Larry also immortalize a golden in Locks and Cream Cheese

Adding to the fun, friends owninga golden named Tavi offered us some of their doggie photos. These colored photos seemed perfect for our book. Tavi made two profound statements for us:

“Woof, I’m Tavi, Goldie’s understudy and role model” and “All this detective work makes me so doggone tired.” 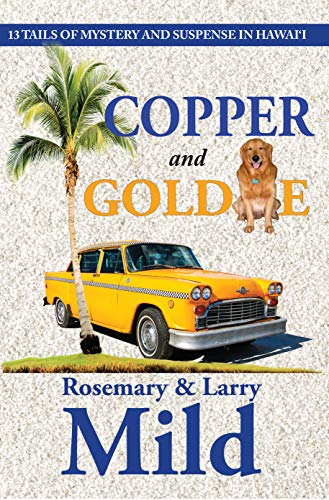 In Copper and Goldie, 13 Tails of Mystery and Suspense in Hawai‘i, homicide detective Sam Nahoe takes a bullet in his spine in the line of duty. Disabled, his career with the Honolulu Police Department shattered—what now? Jobless, lonely, and unwillingly divorced, Sam becomes a Checker Cab driver. Seeking a partner, he adopts a rescue golden retriever—with a dollopof Doberman, and trains her to perform neat tricks like growling at a fare who doesn’t tip. He and Goldie cruise Oahu for fares, encountering thieves, kidnappers, vengeful wives, and even killers, compelling Sam to get his private investigator license. His Sunday visitations with his daughter, Peggy, can turn a magical park day into a hair-raising crime scene, but his shrewd little kid becomes a miniature sleuth in her own right. Sam’s Hawaiian heritage provides him with spunk and street smarts. With the bullet still in his spine, he hobbles around on two canes he’s dubbed Cane and Able as he orders Goldie to chase down the bad guys. His favorite snitch, card-sharp Sophie, asks him: “You still walkin’ with them giant chopsticks?” The book includes thirteen individual detective mysteries with pictures. 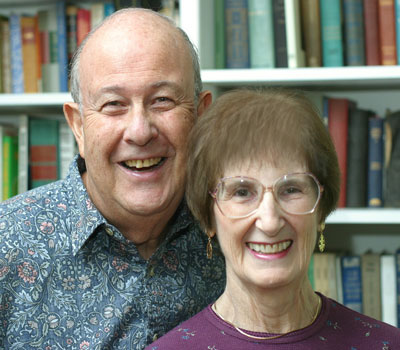 ROSEMARY AND LARRY MILD, cheerful partners in crime, coauthor mystery, suspense, and fantasy fiction. Their popular Hawaii novels, Cry Ohana and its sequel Honolulu Heat, vibrate with island color, local customs, and exquisite scenery. Also by the Milds: The Paco and Molly Murder Mysteries: Locks and Cream Cheese, Hot Grudge Sunday, and Boston Scream Pie. And the Dan and Rivka Sherman Mysteries: Death Goes Postal, Death Takes A Mistress, and Death Steals A Holy Book. Plus: Unto the Third Generation, A Novella of the Future, and three collections of wickedly entertaining mystery stories—Murder, Fantasy, and Weird Tales; The Misadventures of Slim O. Wittz, Soft-Boiled Detective; and Copper and Goldie, 13 Tails of Mystery and Suspense in Hawai‘i.

ROSEMARY, a graduate of Smith College and former assistant editor of Harper’s, also delves into her own nonfiction life. She  published two memoirs: Love! Laugh! Panic! Life With My Mother and the acclaimed Miriam’s World—and Mine, for the beloved daughter they lost in the terrorist bombing of Pan Am 103 over Lockerbie, Scotland. On her lighter side, Rosemary also writes award-winning humorous essays, such as failing the test to get on Jeopardy; and working for a giant free-spending corporation on a sudden budget: “No new pencil unless you turn in the old stub.”

LARRY, who was only called Lawrence when he’d done something wrong, graduated from American University in Information Systems Management. In 2019 he published his autobiography, No Place To Be But Here: My Life and Times, which traces his thirty-eight-year professional engineering career from its beginning as an electronics technician in the U.S. Navy, to a field engineer riding Navy ships, to a digital systems/instrument designer for major Government contractors in the signal analysis field, to where he rose to the most senior level of principal engineer when he retired in 1993.

Making use of his past creativity and problem-solving abilities, Larry naturally drifted into the realm of mystery writing, where he also claims to be more devious than his partner in crime and best love, Rosemary. So he conjures up their plots and writes the first drafts, leaving Rosemary to breathe life into their characters and sizzle into their scenes. A perfect marriage of their talents.

THE MILDS are active members of Sisters in Crime where Larry is a Mister in Crime; Mystery Writers of America; and Hawaii Fiction Writers. In 2013 they waved goodbye to Severna Park, Maryland and moved to Honolulu, Hawaii, where they cherish quality time with their daughters and grandchildren. When Honolulu hosted Left Coast Crime in 2017, Rosemary and Larry were the program co-chairs for “Honolulu Havoc.”

Over a dozen worldwide trips to Japan, China, Australia, New Zealand, Thailand, Cambodia, Burma, Great Britain, France, Italy, Israel, Egypt, and more have wormed their way into their amazing stories. In their limited spare time, they are active members of the Honolulu Jewish Film Festival committee, where Larry is the statistician and recordkeeper for their film ratings.

Links to Site  and Social Media: