The birth of my sci-fi novel Unexpected Rain goes all the way back to November 2009. I had been writing for a while before then, and had tried my hand at a couple of other sci-fi/fantasy novels, but couldn’t seem to get them past the halfway mark. Finally in 2009, I decided to try the National Novel Writing Month challenge and write 50,000 words in the month of November. I 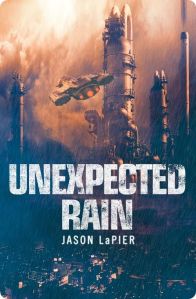 wanted a fresh start at that point, so I created a storyline entirely unconnected from anything I had done before. I made it through NaNoWriMo just barely hitting the 50k word goal, but the work was far, far from over.

I chose a somewhat straightforward science fiction setting: far enough into the future that interstellar travel was possible and a few nearby star systems had been colonized. No aliens, no special powers, no killer robots. I would say the base setting of the TV show Firefly would come closest (minus the psychic girl). Don’t get me wrong: I love aliens, special powers, and killer robots, but in my universe, I left that stuff out so that I could focus on a different angle: a murder mystery for the interstellar age.

For the crime that kicks off the novel, I drew from my subconscious… apparently. I had written a short story years before called “Murder by the Block”, that I had completely forgotten about. It wasn’t until much later that I realized the same mass-murder had taken place in both stories.

The technology of Unexpected Rain mostly works without anyone knowing how or why, until it doesn’t work, and then some explanations leak through. I’m a software engineer by trade, and so a lot of my day-to-day observations inform some of the underpinnings of my future world. I love to play with the disconnect between the designs of engineers and the real-world usage of their efforts by consumers. So while some of the technology is born from “futurist” thinking, some of it is also very tongue-in-cheek, and some of it is even a little cynical in origin. In my future, leaders would like to think of the domes as utopian, however the love of capitalism never waned, and so as a result there is a more or less artificial economy. Technology has advanced to the point where many jobs could be obsolete; nonetheless, those jobs continue to exist because they give purpose (and income) to the masses.

For the two central characters of the book, I wanted to create a dynamic between two different backgrounds and personalities: an “odd couple” (though not a romantic couple, mind you). Jax is just an operator who works on life support systems inside a domed city on a distant planet. He’s kind of an underachiever, a little lost and directionless, going through the motions of life, and then everything is turned upside down when a whole block loses oxygen while he’s on duty and he’s arrested for the murder of the residents. Runstom is a law officer in a corporation called Modern Policing and Peacekeeping – essentially he’s a cop for hire. He’s been around a while and should have been promoted to detective, but because of his background, he’s been held back. Despite his gruff exterior, he seems to be the only one willing to question whether or not Jax is guilty of the crime and has to make a choice of whether or not to risk his career to dig deeper.

There is a third point-of-view character, an assassin called Dava. She’s a significant character, but her arc is tangential to the murder plot that drives the novel. As much as I loved the back and forth between Jax and Runstom, I realized I needed a third character to balance them out. Dava also gives an opportunity for the reader to get insight behind what drives the criminal elements of the story. As a child, she was “rescued” from the deteriorating Earth, only to find herself dropped into a dome on another planet and orphaned. As a teen, she was recruited by the criminal outfit known as Space Waste. Her role will increase dramatically in Unexpected Rain‘s sequel.

Years ago, I started Unexpected Rain down the self-publishing route, but couldn’t get much traction – mainly because I didn’t know what I was doing. In late 2012, HarperVoyager, which is a sci-fi/fantasy imprint of HarperCollins, was looking to add new authors to their digital-first initiatives. “Digital first” simply means releasing an ebook first, then releasing a physical book later. It gives the publisher an opportunity to drive marketing efforts directed at ereaders, as well as take a risk on unknown authors without printing up thousands of books. HarperVoyager held an open submission period for two weeks in October, 2012. They were flooded with over 5,000 manuscripts during that time and it took them a full year and a half to select the fifteen they wanted to publish, and Unexpected Rain was among them. They’ve been great to work with, helping me edit the book and giving me just a mind-blowingly fantastic cover. The digital release of Unexpected Rain is May 7th, to be followed by a paperback release on November 5th, 2015. The other two books in the trilogy are planned for release in mid-2016 and mid-2017.

Thanks for giving me a chance to tell the story behind Unexpected Rain!

Born and raised in upstate New York, Jason LaPier lives in Portland, Oregon with his wife and their dachshund. In past lives he has been a guitar player for a metal band, a drum-n-bass DJ, a record store owner, a game developer, and an IT consultant. These days he divides his time between writing fiction and developing software, and doing Oregonian things like gardening, hiking, and drinking microbrew. He is always in search of the perfect Italian sandwich.