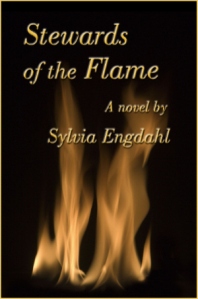 I had two inspirations for Stewards of the Flame, which brought two subjects that most people would consider quite separate together in an unusual way.  The first was my wish to express my dismay over today’s attitudes toward health care, and the second was a desire to explore the ideas about so-called paranormal powers of the human mind that I had dealt with in my previous novels.

All my life I’ve been outraged by our society’s paternalistic promotion of what “authorities” believe is best for everyone’s health, based on statistics without regard to individual differences or freedom of choice. The increasing involvement of government in this area — not merely in control of medical care but in tax-support propaganda — is a trend I find deeply troubling.

As one of the characters in Stewards of Flame says, “Whenever health authorities succeed in overcoming some actual problem, such as contagion, they are left with a bureaucracy that must justify its existence by medicalizing more and more aspects of simply being human. Where it’s combined with the natural tendency of government to encroach on personal liberty, that process has been unrestrained.”

And so, for the story, I created a space colony where this trend has been carried to its ultimate logical conclusion: the government and the medical authorities are one and the same.  All crime is viewed as illness and all illness is considered crime; the Hospital Administrator is the chief executive and there are no police except the ambulance officers.  Medical treatment is compulsory and everything thought to be bad for health is illegal.  It’s not really very far-fetched when you consider that medical considerations would be given top priority anyway in establishing a colony on another world — although the story includes one element that carries the idea to reductio ad absurdum lengths.

Such a government would obviously be oppressive, yet to have made it corrupt would have ruined the point of the story, which is that the people of that world democratically voted away their freedom.  So, since the regime is supported by the public, the dissidents who are my protagonists aren’t trying to overthrow it and they know they have no chance of persuading the majority to reject it.  That, I’m afraid, is all too realistic.  I don’t see any way out myself, except for humankind to mature beyond reliance on the current concept of health care to a level at which people control their own health — and do other things — through mind powers that  are now considered “paranormal.”  This could not happen today, which is why the story had to be set in the distant future.

Anything set on another planet in the distant future is, by definition, science fiction.  This was a problem, because my fiction has always appealed more to general audiences than to readers with a lot of science fiction background; though many sci-fi fans enjoy it, it’s neither action/adventure fiction nor “far out” enough for the taste of the majority.  I was able to get my earlier novels published (and later republished) by major publishers because they were Young Adult novels, and from the marketing standpoint that field is entirely separate from genre fiction.

I knew that my adult novels could be mass-marketed only as genre fiction and would therefore, despite my reputation in the YA field, be unpublishable in today’s market.  Being used to acceptance by traditional publishers, it took me awhile to accept the idea of writing a novel I knew I would have to self-publish.  But the story took over, and since I am not young enough for there to be a chance of the market changing in my lifetime, I went ahead with it.  Since I have the desktop-publishing and editing skills needed to produce the book myself, I did not have to pay for its publication, which I’d have been unwilling to do.

However, though the book has had excellent reviews and won a bronze medal in the Visionary Fiction category of the 2008 Independent Publisher (IPPY) Book Awards, it is hard to promote because the reviews usually get posted in the “science fiction” section of websites, where the readers most apt to like it aren’t looking.  So I am trying to reach those readers through blogs that mainstream readers visit.  If you’re not a science fiction fan, don’t let that label put you off!

Sylvia Engdahl is best known as the author of highly-acclaimed Young Adult science fiction novels, one of which was a Newbery Honor book and a finalist for the 2002 Book Sense Book of the Year in the Rediscovery category. However, her trilogy Children of the Star, originally written for teens, was republished as adult SF, and she is now writing fiction only for adults.

Engdahl is a strong advocate of space colonization and has maintained a widely-read space section of her website for many years. She lives in Eugene, Oregon, and currently works as a freelance editor of nonfiction anthologies.

More information about Stewards of the Flame, the topics with which it deals, and its newly-released sequel can be found at www.stewardsoftheflame.com. Her main website is at www.sylviaengdahl.com.