In writing One of Windsor, my inspiration was a real woman named Alice (Alse) Young, the first witch-hanging victim in the American colonies. Telling her story became a quest for spiritual justice by exposing this horrific event in the form of a novel where real history combined with literary invention. Shocked and surprised that Connecticut had its own gruesome witch trial history, I couldn’t understand how Alice was unknown to even some people in the town of Windsor, the setting of her story. The events leading up to her hanging in 1647, forty-five years before the Salem witch trials, would have had to be alarming and 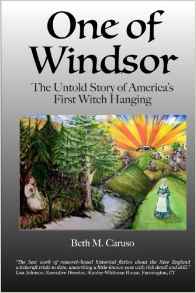 tumultuous to result in such a tragic episode. Yet, they were curiously hidden from view. I became obsessed with Alice Young and had to know more.

Unfortunately, very little was known about her as a historical figure. Every time I started my quest to capture Alice’s elusive story and her essence, I ran into dead-ends. It seemed like a historical cover-up of sorts. The identity of this tragic soul was not even known until the late 1800s when James Hammond Trumbull discovered it on the inside cover of the Matthew Grant’s Diary.  Up until that time, she was only known as  “One _ _ _ of Windsor” as referenced in the John Winthrop Diaries. Dates given in both entries matched, allowing Trumbull to identify her positively. And even then, he only shared the information with a few other historians. In any case, the records were sparse at best.

However, one day in the spring of 2013, when I was reading about the importance of neighborhoods as a vital part of Puritan society, the idea struck me. Since I couldn’t find information about Alice, I decided to research the lives of her neighbors to see if any clues about her would surface. Fortunately, James Hammond Trumbull had already compiled a map for Windsor from that time, but with a large range of years for that early colonial period instead of a specific year.  On the map, he listed the Young property at Backer Row.

I delved into the lives of every other family living on Backer Row in 1647, the year of her murder. With the help of old land records from the town of Windsor, genealogical records, and many other historical documents, I was able to recreate the map for Backer Row specific to 1647.  The pattern of people that came to life before me on Backer Row amazed me and a possible story and theory quickly evolved about what might have happened to her and who she was. What astonished me the most, was that the story was hidden by the fact that the women, the wives of the men on Backer Row, were largely ignored as so often happens in early American history.

Writing about Alice was a rich and interesting experience. From the beginning, I wanted to convey that she was not just a victim of an unjust witchcraft accusation, but she was a human being with a full life who was dearly loved and tragically lost. I always sensed that there was so much more to her humanity than the unfortunate events that led to her hanging.

Alice Young’s story was buried for over three hundred and sixty-five years.  I could not stand the thought of it being buried again in the hands of the wrong publisher. I was unwilling to take that chance with this novel. That is why I decided to self publish under Lady Slipper Press. I also wanted more autonomy than a traditional publishing route would allow. I’m glad I did it this way for my first novel but I may try to work with a publisher for my second book. It is another historical novel set in New Amsterdam and Hartford in the 1600s featuring tavern wenches, unlikely friendships, more witch trials, alchemy, secret codes, treason, and some repeat characters from One of Windsor.

Thank you for giving me the chance to tell you about my novel One of Windsor: The Untold Story of America’s First Witch Hanging and its protagonist Alice Young! It was a pleasure to be here at The Story Behind The Book. 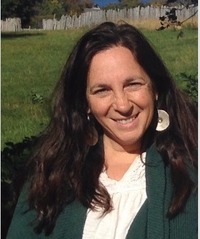 Beth M. Caruso grew up in Cincinnati, Ohio and spent her childhood writing puppet shows and witches’ cookbooks. She became interested in French Literature and Hispanic Studies, receiving a Bachelor of Arts from the University of Cincinnati. She later obtained Masters degrees in Nursing and Public Health.

Working as a Peace Corps volunteer in Thailand, she helped to improve the public health of local Karen hill tribes. She also had the privilege to care for hundreds of babies and their mothers as a labor and delivery nurse.

Largely influenced by an apprenticeship with herbalist and wildcrafter, Will Endres, in North Carolina, she surrounds herself with plants through gardening and native species conservation.

Her latest passion is to discover and convey important stories of women in American history. One of Windsor is her debut novel. She lives in New England with her awesome husband, amazing children, loyal puppy, and cuddly cats.

Alice, a young woman prone to intuitive insights and loyalty to the only family she has ever known, leaves England for the rigid colony of the Massachusetts Bay in 1635 in hopes of reuniting with them again. Finally settling in Windsor, Connecticut, she encounters the rich American wilderness and its inhabitants, her own healing abilities, and the blinding fears of Puritan leaders which collide and set the stage for America’s first witch hanging, her own, on May 26, 1647.

This event and Alice’s ties to her beloved family are catalysts that influence Connecticut’s Governor John Winthrop Jr. to halt witchcraft hangings in much later years. Paradoxically, these same ties and the memory of the incidents that led to her accusation become a secret and destructive force behind Cotton Mather’s written commentary on the Salem witch trials of 1692, provoking further witchcraft hysteria in Massachusetts forty-five years after her death.

The author uses extensive historical research combined with literary inventions, to bring forth a shocking and passionate narrative theory explaining this tragic and important episode in American history.