Just before finishing my last year as an English major at Rhode Island College in Providence, the idea for Illusion of an Ending was born on one fateful summer day when my car crashed into another car. It was only a minor accident, the first one in my life, but I will never forget the awful sound of cars colliding, the fear that surged through my body. 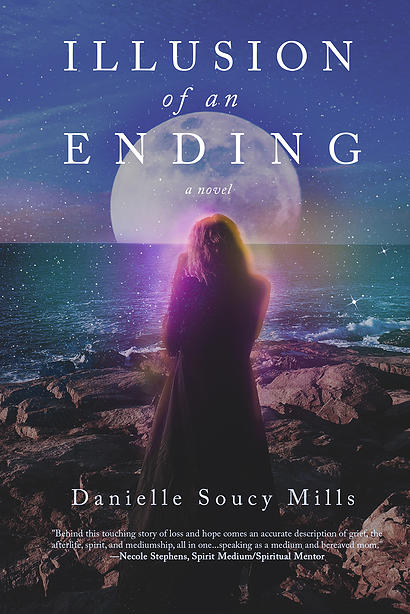 I tried hard not to bash myself for being an awful driver. The busy four-lane highway with no traffic lights begged for such an incident. I replayed the accident in my head, my left-hand turn into…. Boom. It was as if the black SUV had fallen out of the sky. If only I had not agreed to substitute my co-worker’s gymnastics class that day, on her birthday, this never would have happened. If only I could go back and do the turn again, safely. If only…

I pulled over, met the man in the other car while we waited for the police to arrive. Turned out, he was in a rental car visiting Rhode Island all the way from southern California.

“I’m going to move there someday,” I blurted out, though the side of me that had spent its entire existence on the east coast did not truly believe it.

As we spoke about the California freeways and his insistence that there was nothing out west as dangerous as these Rhode Island roads, my mind drifted. There are no accidents, I thought. Maybe I have to write about this.

When I returned home that day in search of some sort of consolation, I found none. In fact, it got worse. It was also on this day that my friend lost his childhood friend and roommate in a motorcycle accident out in California, an hour away from the hometown of the man I had just met. Though I did not know him, I was devastated for the young man’s family and for my friend.

A month passed. Autumn hit, and I began my search for higher education in creative writing. Rhode Island was nice, but California continued to call my name, a faint whisper in my heart. As a kid, just like I knew I wanted to be a writer, I also knew that eventually I would find myself living in a place with constant summer-like seasons, no matter how scared I was of leaving home. When I found the M.F.A. program at Chapman University in Orange, CA, I knew within the core of my being that I would end up there.

As the events in my life continued to subtly lead me where I needed to go, I realized that these very events were summoning the story I needed to write. Not just my story, but other peoples’ stories, together: my first character was a young man at the peak of his potential who died suddenly, but still had a message for those he had left behind on Earth. He wanted to make sure his mother knew he was okay, and that death was not anything to fear. All he needed to do was to find a medium to communicate. I held the ideas in the back of my mind, unsure of when I would attempt this first novel.

Soon after I applied to Chapman, I got word of a young woman who would be transferring to our school to compete on our gymnastics team. Her family lived just 20 minutes away from my prospective school. Her mother offered for me to stay at their house, and a few months later I left to visit California.

I feared being homeless and alone, three thousand miles from my family, but the scary parts continued to fill themselves in. During my visit, I was offered a part-time coaching job at my friend’s gym. I met another friend from the gym, and we all went to a party on St. Patrick’s Day, where I was introduced to more great people. I found my own place to live using a random website. After I packed up my bags and drove west, I learned that many of the people I met were connected. One roommate had gone to grade school with a friend from graduate school, and another roommate knew my co-worker. In fact, I had met my roommate’s friends at the St. Patrick’s Day party months before I had met her. I even found myself at the same party several years in a row after that. It was each of these coincidences that reminded me I was exactly where I was supposed to be. I realized that my novel must also show how people’s life stories, seemingly separate, intertwined for a purpose.

Chapman required us to write a novel or collection of short stories for our graduate thesis, so I took the leap and began the first chapters, unsure exactly where they would lead me. While I knew my character Patricia’s story would connect to Lorrena’s in order to reach the woman’s son Jimmy after his passing, I found myself writing to learn what would happen next. And like life, I realized events I had written were subconsciously leading me in the direction I needed to go to bring everyone together.

Over the past 15 years, I have also been guided toward many texts which helped me gain a better understanding of the world beyond the one we experience in our everyday physical reality—accounts of near-death experiences, memories of life between lives, out-of-body experiences—concepts that seem unbelievable. Though seemingly crazy, I used concepts that are very real to many people who have experienced them.

In writing this book, I hope to spread the message of consolation that: wherever it is our stories come from, we cannot be afraid to write and live them out all of our hearts. Trust that our stories go on, always and forever.

Illusion of an Ending is a Finalist in the 2015 Readers’ Favorite International Book Awards in the General Fiction category.

Danielle Soucy Mills is the award-winning author of children’s book, Tina Tumbles and Visionary & Metaphysical novel, Illusion of an Ending. A lover of books since childhood, she studied English and creative writing at Rhode Island College, before moving to California to earn her M.F.A. in Creative Writing from Chapman University. She enjoys writing books for both children and adults which inspire, encourage, and delve into our Divine purpose for being. Danielle has made guest appearances on The Nancy Ferrari Show on iHeart Radio, The Writer’s Divine Den Radio Show, and has been featured in Bellésprit Magazine. She currently resides in San Diego with her wonderful husband, Jesse, and her ever-growing collection of books.